The Wimbledon International Music Festival is honoured to be supported by the Tertis Foundation which was set up in memory of the pioneering viola player Lionel Tertis, who lived for many years at No. 42 Marryat Road, Wimbledon, and who did so much to promote the viola as a solo instrument.

One name still dominates the viola world – indeed ‘bestrides it like a Colossus’ – that of Lionel Tertis Though small in stature he chose a very large viola to create the full and deep sonority he loved; indeed, he developed a design for a new viola to combine almost cello-like tone with ease of handling.

The rise of the viola from obscurity to prominence was largely Tertis’s achievement; he also begged and bullied new repertoire for his viola from the foremost composers of the day. Unswerving idealism and sheer determination were the hallmarks of Tertis’s character: if he met a passage that he found difficult he would practise it wearing his winter overcoat so that it might seem easier in performance.

In 1964 Tertis was awarded the coveted Gold Medal of the Royal Philharmonic Society, thus achieving a unique confirmation of his eminence; he had progressed from self-taught beginnings through orchestral ranks to ultimate acceptance as a true viola soloist. According to the late Sir John Barbirolli ‘he is still the father of all viola players.’ 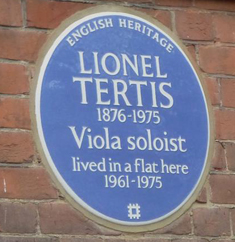